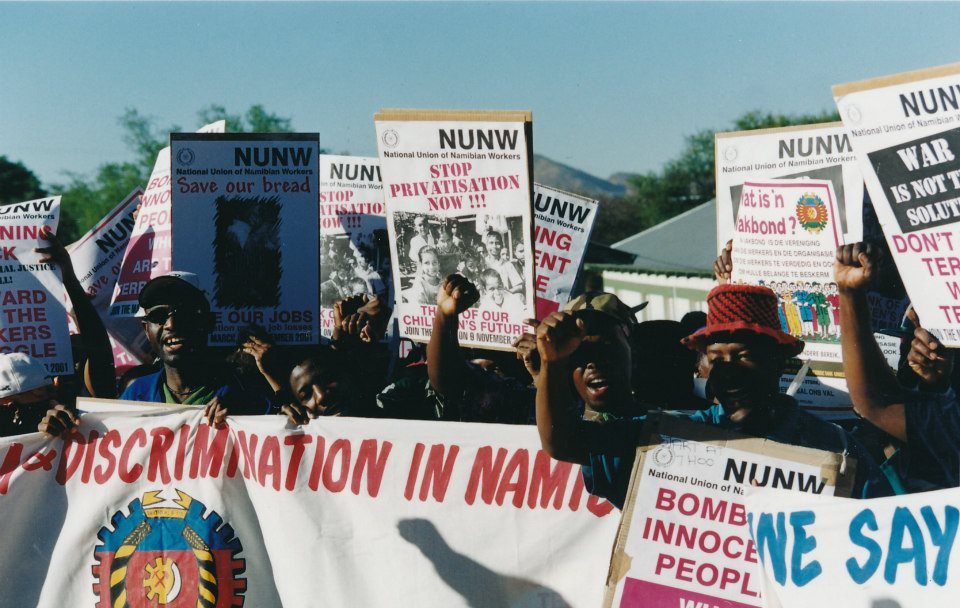 The Workers’ College attended the graduation ceremony of the LaRRI Labour Studies Diploma – class of 2013.

Though LaRRI is a research organisation in Namibia, they have always displayed a keen interest in Worker Education. The Workers’ College, always worked closely with LaRRI in education programmes both locally and on the continent but a special collaboration between the College, LaRRI and the University of KwaZulu Natal (UKZN) was formed 11 years ago and this resulted in the Labour Studies Diploma of LaRRI being accredited through the College by the UKZN – read more in the Speech delivered by Comrade Herbert Jauch

The speeches delivered by the other two guest speakers as well as the director of LaRRI, with regard to the current state of worker education, and also making reference to cross-border education, have been included below.

Keynote address by Honourable Alpheus Muheua, Deputy Minister, Ministry of Labour and Social Welfare, at the occasion of the LaRRI certificate in labour Graduation Ceremony at the Polytechnic Hotel School, Windhoek, 30 August 2013.

The LaRRI board of trustees, the director of LaRRI, Comrade Hilma Shindondola-Mote, the director of the Worker’s College, Comrade Kessie Moodley, leaders of the different trade unions represented here and your members-members of the media, dear graduates, Ladies and Gentlemen.

I was very happy to receive this invitation to attend the LaRRI graduation ceremony for the certificate in labour studies. LaRRI has provided and continue to provide inspiration as an institution of note in Namibia. LaRRI has become known as a path-breaking institution in the area of labour research and education for workers and their trade unions. I therefore strongly believe that LaRRI should be encouraged to continue doing what they are doing. I am saying this for the following reasons:

• Comrades, with the achievement of independence the focus of trade unions shifted to playing the role accorded to them through the tripartite structures. Such a role requires not only a militant approach to worker’s issues, but an attitude of service delivery that is anchored in theoretical understanding;
• As government we are aware that during our early years of independence, Namibian trade unions received significant support from the international donor community especially the Scandinavian countries for workers education and training;
• Such support assisted in the broader education programs of the trade unions;
• However, with the advent of new development classifications based primarily on the Gross Domestic Income of the Country, Namibia has lost support because of the its international status of the ‘middle income country’;
• Such classification has affected the ability of the trade union movement to effectively recruit, organise and hence educate its members;
• Education structures existed and we even had educator’s forums, but such structures have increasingly become dormant;
• We are also aware that contemporary trade unions are confronted with a host of old and new challenges. They have to contend with mass unemployment, widespread exploitation at the work place due to new forms of employment especially labour hire and sub-contracting;
• It is due to all these challenges that union education programmes are needed to equip workers to actively participate in their unions and broader society;
• It is no longer sufficient to just deal with traditional union role related topics such as collective bargaining, health and safety or labour law, but trade unionists need to understand the broader structural issues that affects their role

Perusing through the LaRRI curriculum, the content seem very exciting since it includes topics such as trade union history, Namibia’s political economy, labour law and collective bargaining, affirmative action and gender, trade union development and globalization. These broad ranges of topics are useful in equipping workers to confront the challenges they face today, both in their unions and in society in general.

The Theme for this year is: ‘Tackling exclusion and restoring social and economic justice through labour education’.

I think this theme is so befitting. Namibian workers due to their contribution to the liberation struggle were strategically excluded from educational opportunities. The course that LaRRI offers therefore tries to close that gap that was created over centuries of colonialism and apartheid. Through that, LaRRI is assisting the government in restoring much needed social and economic justice which our workers were stripped off and denied.

I must congratulate LaRRI for ensuring that the certificate was officially accredited by the National Qualifications Authority (NQA) in 2008. More importantly, it is the only education program in the country that deals with topics from a labour perspective and with the overall aim to assist workers to shape their own destiny through strong, democratic and accountable trade unions.

Comrades, labour education is different from the pure academic education carried out at universities, or that done for, or by representatives of capital. Labour education is informed by the struggles and experiences of the working people. It is shaped by their values and principles and their world view, which is different from that of capital. While labour is the primary source of value, predating capital and being responsible for its creation, workers however remain vulnerable and undervalued. Hence the need to untangle the paradox that while Africa is the richest continent in the world, Africans are the poorest.

Workers are the creators of wealth and hence need to play a critical role in the next phase of our liberation-which is the economic liberation struggle. Considering the vast resources of the African continent and of Namibia in particular, there is no reason why the majority of our people should languish in poverty.

Labour education graduates therefore should continuously seeks to understand the underlying causes of the deprivation of labour; the existence of abject poverty amidst plenty; the uneven distribution of resources and income. Apply the knowledge you have gained, because what you learned is not knowledge for its own sake-but knowledge geared towards empowering workers to assist us as the government to overcome our sustainable development dilemma – it is action-oriented education.

On behalf of the Minister of Labour and the whole Ministry and indeed on my own behalf, we join all of you in congratulating LaRRI and all the graduates in their achievement.